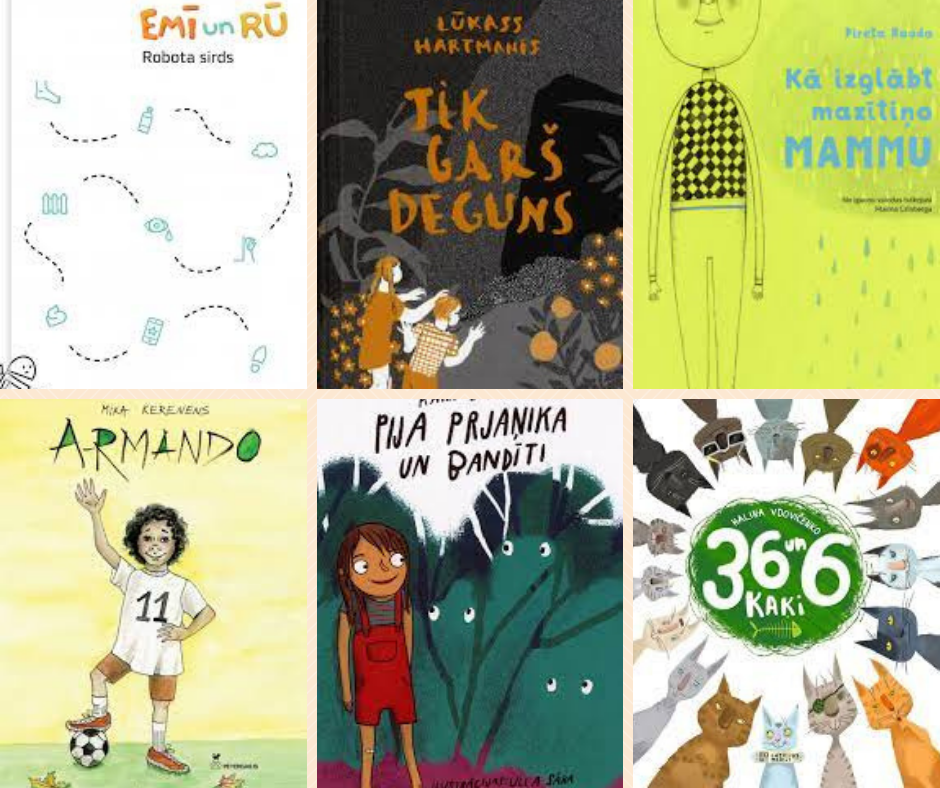 An exciting and heartfelt book for curious children, made after the detective series "Emī un Rū Rū".
Emilija and Rūdis get acquainted in a very funny situation - on a very ordinary day, they are lured to the attic of a mystical house by a robot, Palauzis, or the World Welfare Maintenance Device, who wants to make both of them his secret agents. This is how the Chimpin-Rimpin Agency is created!
The reader of the book will have the opportunity to follow the progress of Čimpiņ-Rimpiņi agents, funny and scary events that he has to face while solving tasks and fighting with the janitor and other troublemakers of the world. Along with the exciting events, a beautiful friendship is formed - between Emilija and Rūdis, and maybe also the robot Palauzi ... But does the robot know little what friendship means if he doesn't have a heart?
The book contains not only stories, but also encrypted and hidden messages, but nine beautiful stickers are included in the set, which the reader will be able to stick to the cover only after reading one of the nine chapters of the book and knowing where it has the right place.

Peter, who is all known as Pete, and his sister Lena, who is two years old, spend a boring holiday in a Greek resort. The parents are constantly grumbling and they can't find a toy among the holidaymakers.
Stepping away from their beach, children in a neighboring bay on a small, lonely island accidentally meet a strange old man, who appears as the great magician The Wizard.
For almost two hundred and fifty years, he has been hiding from the world because of his huge, ugly nose and is terribly unhappy. The evil rival Damasistrat once stuck his nose, and he doesn't get rid of it with any spells.
Pitt and Lena decide to help the poor man and take him to his uncle's plastic surgeon in Bern to reduce his nose.
Slowly, Burva's old flying carpet struck, they sat on top of it and headed for incredible adventures.
Translated from German by Inga Karlsberga.
Artist Māra Viška.

Sanders is an ordinary boy who lives with his mother near the first floor of a four-storey house in a large park. Like many boys, Sander enjoys football and chocolate ice cream, and sleeps long on Sundays. Sander's mother is also quite ordinary, but only until the day when the baby shrinks like a lego. Then strange events begin, in which not only Sanders and his mother take part, but also the stray dog Neris, the invisible boy Axel, the versatile uncle Allan and the club of ladies who love teddy bears.

36 and 6 cats - just like the eighth characters in Halina Vdovichenko's book, no more and no less - settled in Mrs. Krep's apartment against her will on a rainy evening. However, the uncompromising owner's heart against homeless cats was softened by a sphinx kitten named Baroness. Neither Mrs. Crepe nor her godson, Stass, could have imagined the intrusion of 36 large and 6 small cats into their small apartment, and that this meeting would be a real success story for both cats and humans. The book is published with the support of the Translate Ukraine Translation Grants Program

Armando is a first-class player who wants to play football more than anything else in the world. The boy looks different from his schoolmates, so no one wants to befriend him. The story reveals the difficulties and challenges that Armando will face, on the way to making new friends and settling into a new school. Armando's talent for playing football is innate, because even kicking his cone is very skillful and sociable. Argentina is the birthplace of the world's most famous footballers, home to many talented footballers - Lionel Messi, Diego Maradona and others, followed by millions of football fans around the world. Armando's football talent allows him to make friends at the Tallinn school and "thaw" the hearts of his sometimes so-reserved classmates, especially girls, by sharing the secrets of tango dance steps.

Estonian children's writer Kairi Looka's latest book "Pija Prjaņika and the Bandits" tells about a house in Papeļu aleja 5, where little Pija and her family live - mother, father Pauls Prjaņiks, brothers-in-arms and a cat Vīkšķis. They are often visited by a grandmother and a grandfather who thinks that Easter can be celebrated whenever he wants. Another apartment is occupied by a strange politician Sīms Susi with his uncle - a former circus master who is listened to by a bunch of bunnies. In another - Miriam with her friend Jack from Canada, who can talk to bears. At the beginning of the book, it seems that the strangest things are happening in this house, which sometimes become dangerous, until gradually everything is clarified, gaining a logical explanation. Oh, and where else is Pija's friend Willem, teacher Katrīna, The Mysterious Box, cookies, thieves and cops, old men and cakes? Sometimes Pija has to solve an unimaginable amount of pesky things, but Dad is overwhelmed with rubbing. But there are other moments. "When Willem arrived, Paul Prjanik prepared his own company food. It consisted of fried potatoes. There was nothing else in it. "The most important thing is good ingredients," he explained and threw at Willem with an earthy potato. Dad wasn't very precise, the potato was past Villem and out the window. After dinner, he played cards for candy - Dad demanded it. He sat at the table, six aces in his pants and shamelessly cheating. When the victory was in his hand, he carefully collected the candy due to him and disappeared into his room. Pija and Willem went to brush their teeth. ” Kairi Looka's work is well-known in Latvia, because in 2019 her book “Airport Blocks Do Not Give Up” was published in the publishing house “Pētergailis”. Kairi Looka is a popular Estonian writer who has published seven books, many of which have been translated into English, Finnish, Russian, German, French, Lithuanian and Latvian. Kairi Looka's books have been repeatedly nominated for the prestigious Estonian Cultural Capital Literature of the Year Award, winning first and third place in the "My First Book" competition organized by the Estonian Children's Literature Center, Täheke magazine and Tänapäev (Today). Literature Center Award, etc.