This year, for the first time, the Gulbene Regional Library organized a camp for young people "Following the Threads". Why such a name? 2018 In the summer months, the affiliation game “Threads” organized by the Gulbene County Library gained popularity. The aim was to get to know all the parishes of Gulbene district in an active way. In the game, a special Guide had to be filled in, following the tasks given in it. It was necessary to look for environmental and natural objects (trees, stones), as well as historical and cultural-historical places - memorial sites, manors, etc. The game received an unexpected response from families. When thinking and organizing this year's camp for students, some ideas and visuals from the Ownership Game Guide were used, calling it the Workbook.

An exception was Beļava parish, which was visited on the first day of the camp (July 22). This party can't really be proud of a well-known children's literary writer, so on the first day the young people learned interesting facts about the popular artist - a stranger, Barefoot Irbīte or Voldemārs Irbi. In the morning the bus took us to the Kortene observation tower of Beļava parish. Although it rained a bit, both the children and the two librarians were alert and ready to walk at least 6 km. As it turned out later, the number of kilometers traveled was much higher! Of course, we climbed the tower and eagerly counted the steps, because that was the task in the Workbook. Turns out it's 53! Then we went to Beļava manor, climbing the Kārtene castle mound on the way. Belava manor was present, where the voices of children were heard in May, because here since 1925. there was a school. Unfortunately, due to the small number of students, it was closed. Director Maija Suntaža took us across the school, showing us both the original tiled stoves and the steep wooden stairs to the second floor. We visited the stage near the school, the sports field and the base of the monument dedicated to the baron's horse. After a hearty lunch we went quite a long way to the library of Beļava Parish, where we were met by the librarian Mērija and the local artist Solveiga. We learned interesting facts about the artist Voldemārs Irbi and also tried to draw with watercolor crayons. In total, we covered 10 km that day. 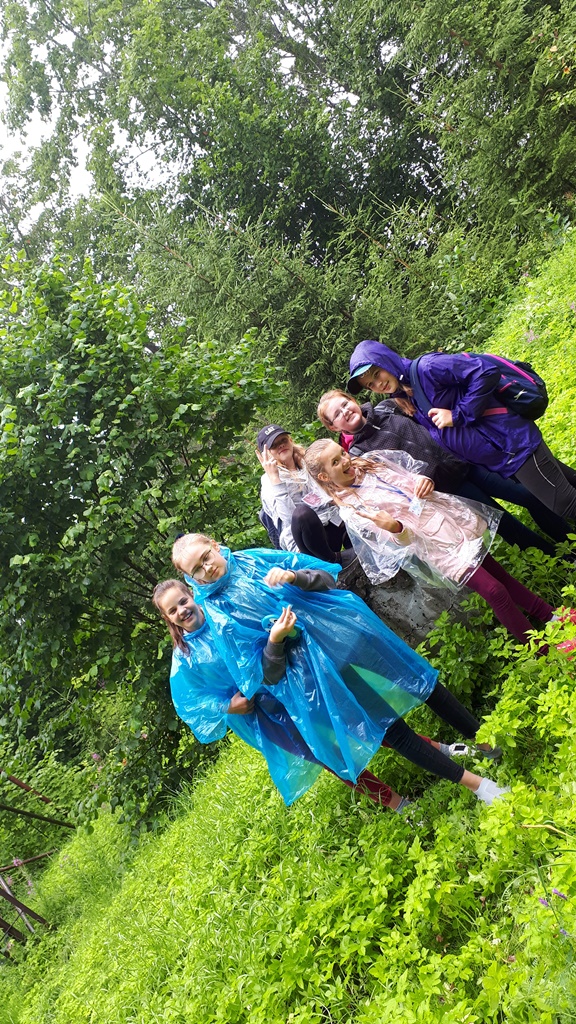 On July 23, we took a bus to Lejasciems Parish Library to start getting to know Lejasciems Parish. On this day it was decided to walk the most kilometers. It did not work out completely, but the day turned out to be intense and full of activities. Librarians Maira and Agnese met us at the library. Writer Anna Sakse was born and spent her childhood in Lejasciems. It is the nature of Lejasciems that has inspired the writer to write the famous "Tales of Flowers". How many fairy tales are there then? It turns out 33! The participants of the camp got acquainted with the memories of the writer's children's days, mentioned the names of the flowers and pictures of the flowers, and looked for the names of the flowers in a grid of letters in the workbook. A little later we were joined by Dana Puidze, an employee of Lejasciems Cultural Heritage and Tradition Center. In the center we got acquainted with ancient tools and household items, we saw an exhibition of students' drawings about Lejasciems. Accompanied by Dana, we got to know the Flower Trail, mentioning the names of the flowers. Then we went for a walk around Lejaciems, paying special attention to the older buildings, we looked at the ruins of Lejasciems church, an environmental object - swans, which was discovered in 2018 and dedicated to Latvia's 100th birthday. Then we headed to the confluence of two rivers - the Tirza and the Gauja. After lunch we went to see the rock climbing tower, which was arranged by the organizer of Lejasciems sports, which at the beginning was intended only to see. However, the day was perfect for climbing and at the request of the children it was decided not to go to Sēravotiņa. Under the guidance of coach Lāsma Gabdulļina, the participants of the camp actively climbed the rock wall (height 9m). By the way, there are not so many well-equipped such walls in Latvia. Lejasciems can definitely be proud! Tired but happily we returned to Gulbene. The number of km traveled these days - 7km. 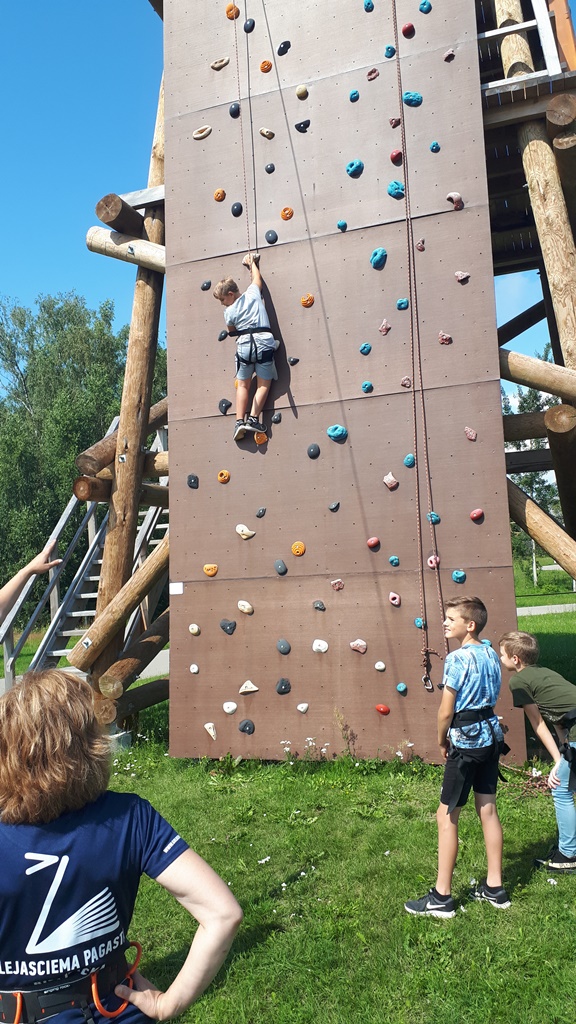 The third day (July 24) was dedicated to getting to know Lizuma parish. At the beginning we went to the candy factory "Lizuma gotiņa", where the participants of the camp found out how many and what candies "Gotiņa" are produced in this place. Then the road led to Lizuma manor, where Lizuma high school is currently located. We looked at the Blue Hall, which is one of the most luxurious rooms. Further activities took place in the library of Lizuma parish, where librarian Evita works. We had both quick speaking and quick reading - do you think we read any books? That's not it! We found out which is the lightest and which is the heaviest book in the library. We weighed it ourselves! Then we went on foot to the birthplace of the local writer Apsīši Jēkabs (Jānis Jaunzemas) "Kalaņģi", where we were met by the housekeeper and hostess Aiva Kraukle. Thank you for a special, emotional and exciting story from all of us, Aiva! We seem to have figured out what literature lessons should look like! We covered a total of 8 km. 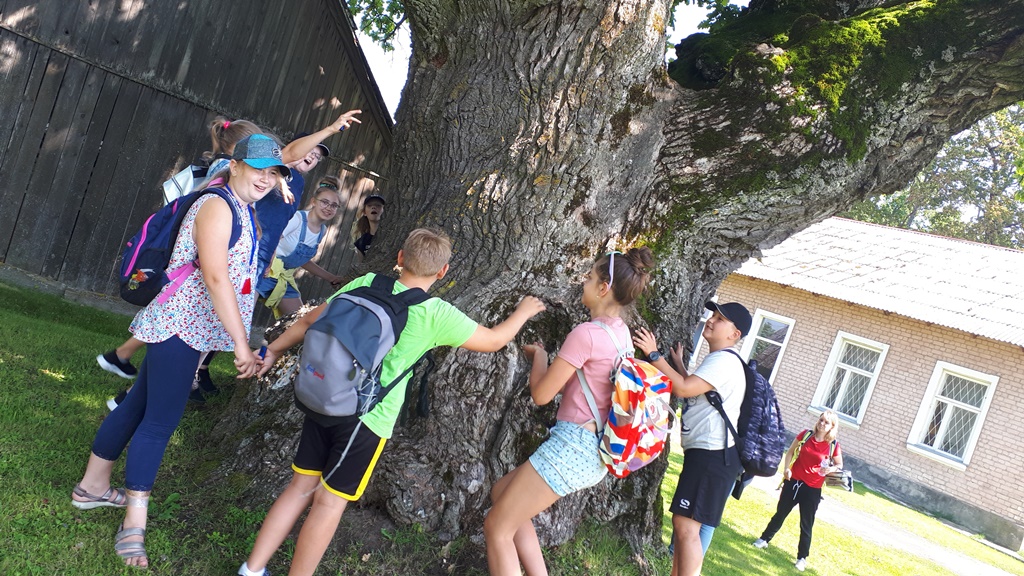 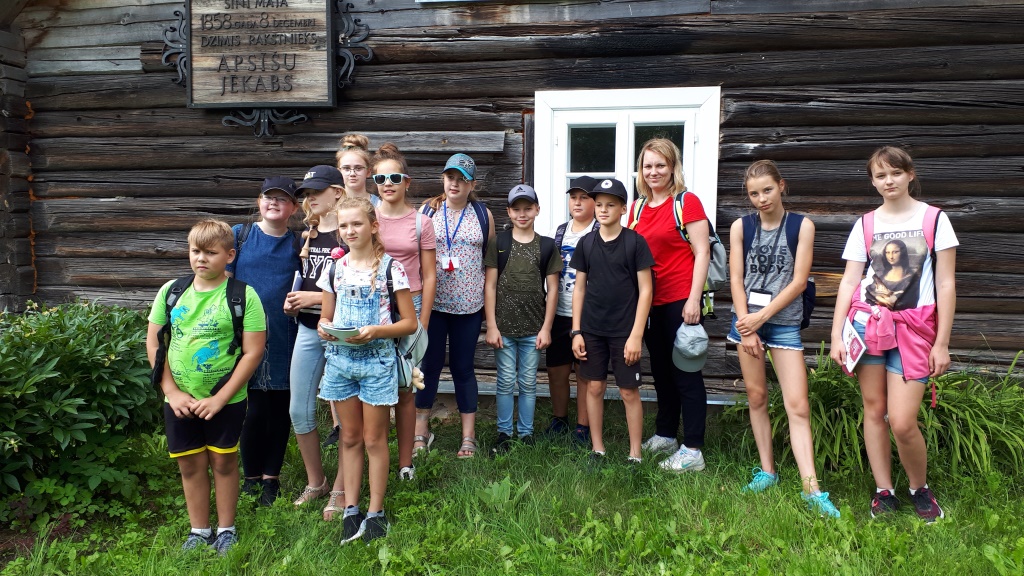 The last, fourth day of the hike took us furthest from Gulbene - to Druviena parish . We started getting to know the parish by visiting the Druviena parish library. The library is located in a building that also houses a culture house. The librarian Daiga invited the participants of the camp to take part in an orienteering game, where they had to find a piece of the puzzle in each place. The participants of the camp got excitedly involved in the offered activities. During the game, we were taken to the Druviena Latvian Lifestyle Center, where the staff presented the expositions located in the premises of the former Druviena Primary School. We were in the Bee Room, looked at the tinsmith's workshop, climbed the tower and each made our own tile with Latvian patterns. Then we traveled to Druviena Old School, where we ate deliciously. The head of the museum-school Kristīne really told about the history of the school, about its most famous student Jānis Poruks. We got into the everyday school of the old students, we looked at the bread chests, chests and bags, we looked at the students' bedrooms. Kristīne even let me sleep in the crib on a straw mattress! The event ended with a real battle near Knipsk, in which the friendship won! Then we went on foot to Druviena, on the way without forgetting to count the oaks of the alley from the Druviena sign to the Lats store. Did you know there are 75 oaks? In total, we covered 8 km on this day. 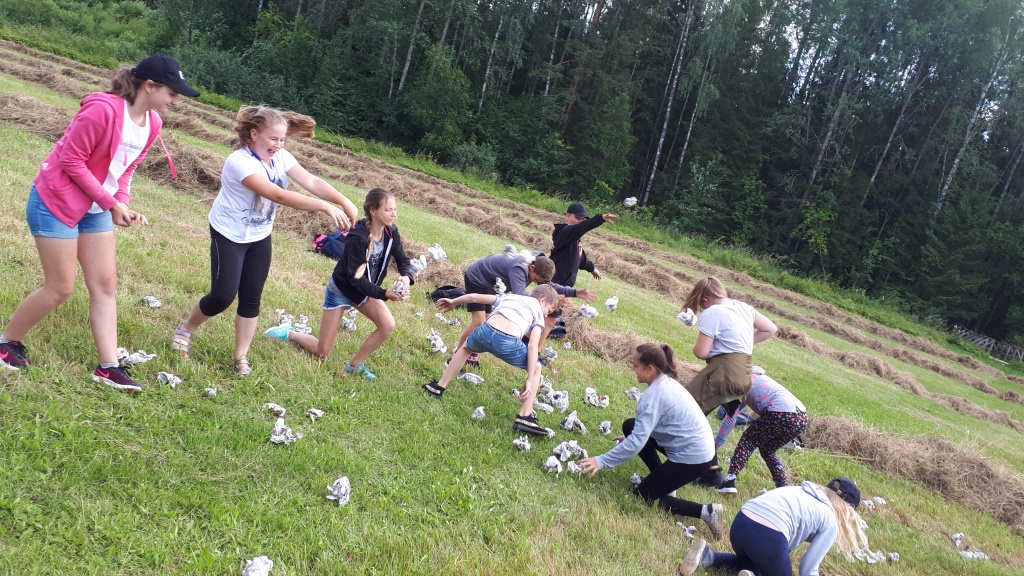 The fifth day for the participants of the camp was spent in the Gulbene district library . Until noon, the camp participants made presentations about what had happened in four days, both using computers in the library hall and drawing and pasting. After lunch, the work continued in the reading room of the Children's Library, where librarian Anda taught how to work with hama beads. It turns out that they can be used to make both animals and letters and numbers. All you need are beads, an iron and parchment paper. It turned out bright, creative and interesting! Even the boys worked! The day ended with presentations prepared by the participants themselves, which were listened to by their parents, brothers and sisters. We hope that the children also liked the small gifts! The delicious pretzel and a wish for the library staff - a similar camp is needed next year as well, because 9 parishes have not been inspected in Gulbene region yet!

Once again, we would like to say a special thank you to Ieva, the manager of the cafe Ozoli, for a very tasty lunch and afternoon, Marya, the manager of the Belava Parish Library, Maira, the manager of the Lejasciems Parish Library, and Agnese, the head of the Lizuma Parish Library. Thanks to Solveiga, a local artist from Beļava Parish, for accepting the challenge and working with children! Thanks to Dana, an employee of the Lejasciems Cultural Heritage Center, for an interesting story and working with children at the rock wall! Thanks to Lāsma, Lejasciems sports life organizer, for your patience and responsiveness! Thanks to the hostess of the Lizuma Kalanggi Museum - Aiva - for the very emotional story and to the head of the Druviena Old School Museum - Kristīne for her patience and enthusiasm! Thanks again to Maija, the principal of Krišjānis Valdemārs Primary School in Beļava, for the kind reception! Thanks to the director of Gulbene County Library Antras for allowing us to express ourselves, because in the end it was the first experience as the organizers of the camp! See you next year and at other companies!

Photos of the camp can be viewed HERE .