By bike on the Green!

In the hottest days of June, immediately after the Midsummer Festival, 29 cyclists went to explore the Green Railways in Latvia and Estonia. Since the 20th century. In the 1960s and 1970s, narrow-gauge railway lines were closed in the territory of Latvia and Estonia (as elsewhere in Europe), but from the 20th century. by the end of the year, a number of wide-gauge railways. The tracks of the closed railway lines have mostly been completely dismantled, buildings and structures have been abandoned or privatized. In turn, the railway embankments have remained in good condition in many places and are used as local rural roads in many places. Some of the closed railway lines have preserved culturally and historically significant objects of railway industrial heritage - station buildings, structures and parts of railway infrastructure. Since 2017, within the framework of the project “Green railways”, several sections of the former railways have been identified and arranged and adapted to tourism.

We chose the section Ape - Valka / Valga. The narrow gauge railway between Valka and Api was opened in 1900. After the founding of the Republics of Estonia and Latvia in 1918 and the division of Valka and Valga between the two countries, a new branch was built from Valga to Api in Estonia, alongside the existing railway. The two lines meet near Koikula, about 13 km from Valga. The railway operated until 1970. Today, the former railway route passes through picturesque countryside and small towns in southern Estonia and northern Vidzeme.

Accompanied by Astra as the first local guide, we got to know the border town of Api, which is rich in natural resources. Someone has called it the "witch's capital" because it has Witch's Cliffs, a fountain with witch brooms and witches spotted around it, and a pine tree with a hole called a witch's mirror. Spring water is good for eye treatment. We took a look at the lovely cobbled streets, the wooden houses built by the Estonians, also the pine, which the Apennians call "Lonely pine". It is about 200 years old, and even the oldest inhabitants of Ape remember it about the same. Growing slowly and branching densely, it has formed a broom in the crown. The pine has reached a height of only four meters. After the tour we go across Jašupīte on a straight path along the path of an overgrown meadow, where after 4 km we are crossed by the state border. Efforts are rewarded by beautiful scenery, forest refreshment and forest strawberries on the side of the road. Our path continues through the Estonian villages - Monisti, which every year during Advent becomes the home of dwarves, and where there is also an open-air museum. Next - Hargla with a beautiful church on the hill. After the refreshment of the bath, we are also ready to “conquer” the 24 m high Tellingumae tower, from which it is worth looking at the winding Mustjegi River. Here we also see a herd of cows going after the river. Right on the border, the river flows into the Gauja, which the Estonians call Koiva. There is also a "window to Europe" right next to the tower - there are 19 such viewing platforms all over Estonia. There is still a long way along the safe roads of Estonia to Valga. In the evening in the guest house "Ezernieki" in Valka next to Zāģezers we are greeted by a large fire soup pot and a country sauna.

The second day is dedicated to getting to know the twin sisters Valka and Valga. There are 6 twin cities in the world. Our guide Signe from Valka County Tourism and Information Center kindly shows both cities. The two Varžupīte (Konnaoja) divides the two cities and only a keen eye notices when one city becomes another. Valencians and Valencians live in a friendly way, without even feeling the differences between countries and cultures on a daily basis. We try our voices on the Valka stage, we climb Putraskalns, some use a self-service stand for bicycle maintenance at the tourist center. We are visiting the red brick station of Valka II, which was closed after the abolition of the Latvian-Estonian border during the Second World War. The windows of the old building show old photos from the "flower times" of the railway, as well as maps of the Green Railway. Everyone is thrilled to ride 3 km of old, unused railway tracks for 3 km. It happens that the two have to mention the pedals very quickly, but the others can only enjoy the process and the nice views.

Then our road leads in the direction of Smiltene. Another bend along the picturesque Gauja, and then we are present at the ethnographic farm "Ielīcas". This is a unique farmstead, which includes a complex of ancient buildings typical of this region. The Latvian film "Pūt, vējiņi" was shot here.

Our last stop is the biological farm "Lejasvaricēni" in Smiltene parish. The most enduring of this stage, accompanied by thunderstorms, do it by bicycle, the rest go by car. The hospitable hosts Līga and Tomas Krīgeri are waiting for us here. Their life philosophy is simple - not to fight with nature, but to cooperate. They use alternative and environmentally friendly methods of farming in the countryside, such as permaculture, construction using natural materials - hobby house, rocket oven, pizza oven, summer kitchen. We learn how a solar dryer works, visit the Walipini greenhouse and raised beds, visit the first walled hotel in Latvia. Although the 130 km of legs covered in two days have not been very sparing, the dancers under the leadership of the folklore group "Rudzupuķe" make you forget about fatigue.

Thank you to all the participants of the bike ride for positivity and endurance! Thanks to Dailis Kadilis for help in organizing the trip! The bike ride was organized by the Europe Direct Information Center at the Gulbene Regional Library. 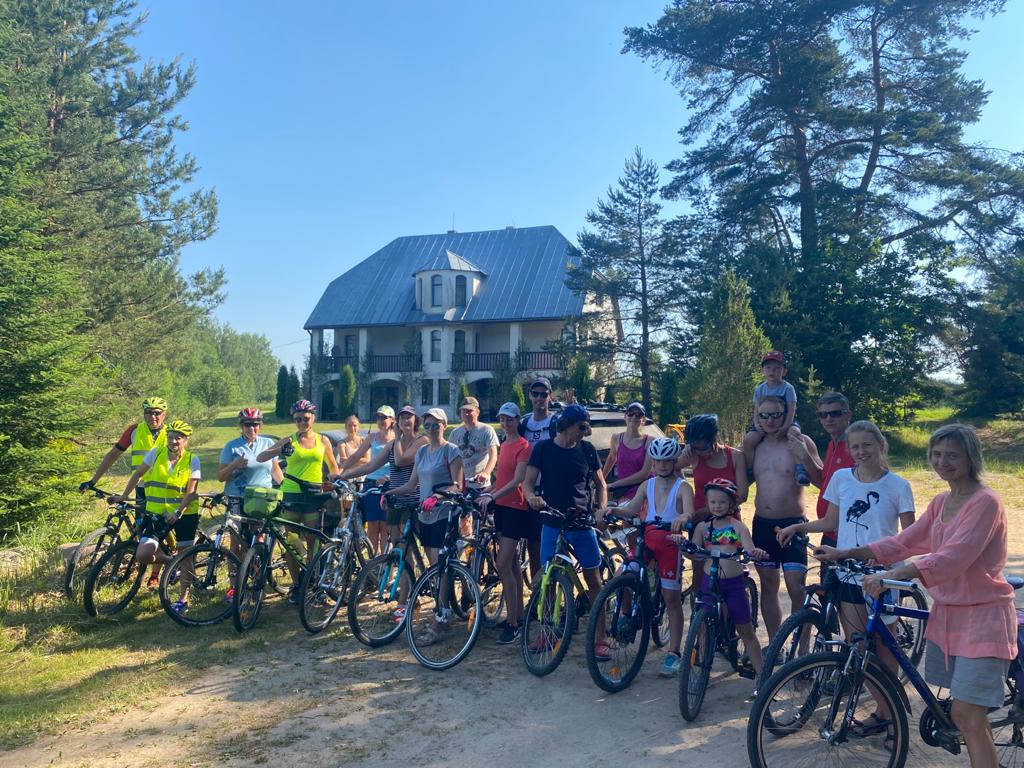