Take your heart off the shelf!

Take your heart off the shelf!

There are many ways to look for joy - some go all over the world, some find it in themselves, in people and know how to share it generously. Among the others is the Finnish poet Heli Laksonen, who visited Gulbene Secondary School and Gulbene Regional Library in the second half of September.

Heli Laaksonen is one of Finland's most popular poets, whose readers and listeners love the wit, sincerity and courage to find poetry in everyday life. Heli Laksonen's book "Kad gos smei" (2012), which was performed by the poet Guntars Godiņš and won four additional throws, won great interest and the Literature of the Year award in Latvia! In 2015, her children's poetry book “Piec ait kalns” was published in the publishing house “Liels un mazs”, 4 years later - a selection of Heli poetry “Soul. Carrots. Undens ”.

This year, the book "Take My Heart Off the Shelf" by the Finnish poet and Aleksandrs Čaks has been published in Latvian. Heli has translated Chak's poems in the Finnish literary language and written answers in her native dialect, which together form a kind of dialogue. Heli Lāksonen's poems are written in the southwestern Finnish dialect, but Guntars Godiņš has cooled them using the features of Vidzeme's Liv dialect.

Guntars Godiņš and Heli Lāksonen have performed in several cities in Latvia, Estonia and Finland and have earned great interest and recognition from the audience, and both poets were received with special sincerity in Gulbene.

Poet Heli Lāksonen and translator Guntars Godiņš agree: “We both respect joy. People usually think that joy is something lower, less important, but we think differently - we bring joy in the sun! ”

Heli's visit took place thanks to the support of the Nordic Council of Ministers' Office, the Rozentāls Society in Finland. Thanks also to the housewives of Stāmeriena castle for a nice tour! 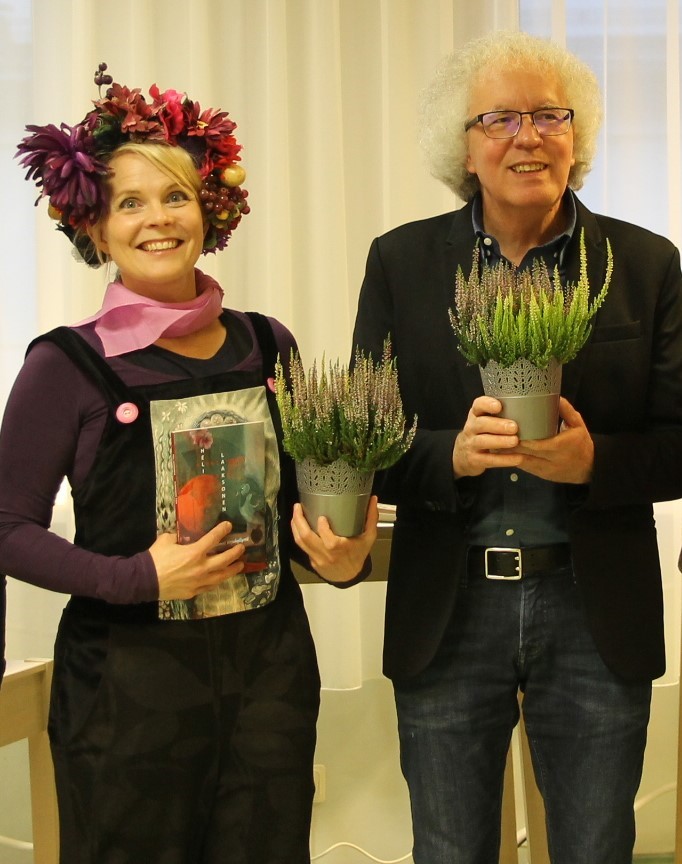